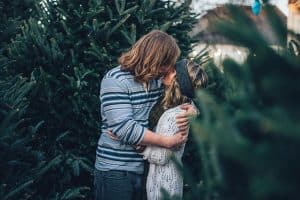 Loyalty nowadays is hard to get. Men tend to flirt around and want the attention of other women. Many times social media plays a big role in flirting and the lack of loyalty. But how can you make him stick with you and be faithful? Here’s how.

Men are hardwired to flirt and seek many partners. They have the male hormone testosterone that makes them want to chase women. They tend to feel more masculine when they get to hook and attract more women.

Having sex with multiple partners is tied to their libido and hormones and how their brains functions. They tend to feel a surge of high and get an adrenaline rush every time they bed a new woman.

Aside from their biological makeup, culture plays a big role in their playboy psyches. They tend to see that having many women will make their social standing among their friends higher and earn praise from their peers.

The Thrill of The Chase

Men are born hunters and they feel that the pleasure of pursuing a woman is challenging for them. They want to chase a woman, hunt her, bait her and then take her. They find this game of chase exhilarating and exciting.

They see that having multiple partners as a trophy of achievement that they can show around to their friends that can boost their ego. On the other hand when they are able to hook the woman and have her, they tend to get cold and lose interest.

There Is Something Lacking

Men tend to fool around when they see that there is something lacking in the person they are dating. They normally stick to a person when they feel happy and contented with their partners. When they feel that there is a void, they try to fill that up by looking for another person who will fulfil their needs.

Another thing is that when they feel unhappy with their partners, they tend to seek other people who will renew their joy and happiness. They long for the spark that they once had. They look for passion, intimacy and sensuality.

How to Keep a Man

Converting a man from being a cheater to someone who is loyal is a difficult feat. A lot of times, it has to be their choice to be faithful to you. However you can change some of your behaviors in order for him to want to be loyal to you.

Men crave for love and care. They want their partners who are sweet and tender. Men see women women who have maternal instincts as good partners mainly because of their biology and also because of how their mothers have cared for them in the past.

Show them sweet gestures. Cook for them. Do nice things for them. Text them loving messages. Don’t be oppressive and don’t act all bossy and negative.

Men value their pride and honor. They hate being emasculated. They don’t want to be put down and they hate being treated poorly. Don’t be a nagger and don’t be controlling. Hear him out. Don’t go about snooping around his things and never ever invade his privacy.

Sex sells. And men and women crave great sex. Men will never let go of a woman who satisfies his needs in bed. Be hot and be totally amazing in bed. Drive him wild and call his name as you do the deed. Give him what he wants in bed. Have sex in random places. Don’t ever be boring and never ever be lazy in giving head. Wash your self and smell good all the time.

You need to be sexy for your man. He has to fantasize about you and want you constantly. Men connect sex with wanting someone and even loving someone, thus being the person of their desires can help boost your relationship. So buy that sexy lingerie and wear that nice perfume that he likes and make him long for you.

Allow your man to have his own time. Let him hangout with his friends. Let him have fun. Do not stop him from working hard and getting the promotion he deserves. Don’t tell him to not do things just because you don’t want him to. Allow him to be himself.

Men get bored. That’s a fact. Don’t let him see you as always being available. Do your own thing. Have a life. If you become too overly available, he will take you for granted. Be passionate about your life so that he will see you as an interesting person who is full of energy and is exciting.

Be there for him but don’t be a doormat. You are not a booty call, don’t let him treat you like that. If you feel that he is just there playing games, call him out. Tell him that you can walk away anytime and that you have a life too. If he is really into you, he will value you.

Yes, we want to make our men loyal. We want them to stop asking women for nudes on social media. We want partners who have eyes only for us. But we can’t really make them faithful unless they want to be too.

You have to see the red flags. If a man is really a cheater, let him go. Don’t waste your time and energy on someone who will just treat you as a trophy is a case and add you to his collection of women. Make sure you value yourself and know your worth.

This website uses cookies to improve your experience while you navigate through the website. Out of these, the cookies that are categorized as necessary are stored on your browser as they are essential for the working of basic functionalities of the website. We also use third-party cookies that help us analyze and understand how you use this website. These cookies will be stored in your browser only with your consent. You also have the option to opt-out of these cookies. But opting out of some of these cookies may affect your browsing experience.
Necessary Always Enabled
Necessary cookies are absolutely essential for the website to function properly. This category only includes cookies that ensures basic functionalities and security features of the website. These cookies do not store any personal information.
Non-necessary
Any cookies that may not be particularly necessary for the website to function and is used specifically to collect user personal data via analytics, ads, other embedded contents are termed as non-necessary cookies. It is mandatory to procure user consent prior to running these cookies on your website.
SAVE & ACCEPT